Something old, something new, something borrowed, something blue. Most of us are familiar with the traditions surrounding weddings, but what is the meaning behind them?

‘Something old’ is about the link to the bride’s family and the past. As a nod to this symbolic meaning, the bride may wear a piece of family jewellery or incorporate a piece of antique lace in a garter. ‘Something new’ is the good fortune and success in the bride’s new life. The wedding dress usually represents the new item. And if the dress is second-hand, the bride will have to look to something else, maybe her new wedding ring, to tick that box.

Blue ribbon in the dress hem

‘Something borrowed’ is to remind the bride that friends and family are there for her should she need help – something to remember when there’s a lot to do after a DIY wedding! The borrowed piece may be jewellery.

‘Something blue’ symbolises faithfulness and loyalty – blue represented purity in biblical times. Blue ribbon is either stitched into the hem of the wedding dress or worn on a garter.

A silver sixpence in her shoe is to bring the bride wealth and happiness, although it would be pretty difficult to walk gracefully with something inside the shoe!

Using a wedding veil is thought to hide the bride’s beauty and ward off evil spirits. During arranged marriages, the bride’s face remains covered until the groom commits to the marriage. Lifting of the veil is the first time the groom sees his bride.

During the ceremony the bride stands on the left of the groom. Traditionally, this was to allow his sword arm to be free and fight any man who may also want to marry his bride.

The tradition of the father giving away his daughter goes back to the days of arranged marriages when daughters were seen as their father’s property. Daughters were given away, usually for a price. Today this act is a symbol of a father’s blessing of the marriage.

Using rice for confetti can be uncomfortable but it was thrown to encourage fertility. Throwing the wedding bouquet was a tradition adopted from America with the belief that whichever single woman caught the bouquet would be the next to marry. 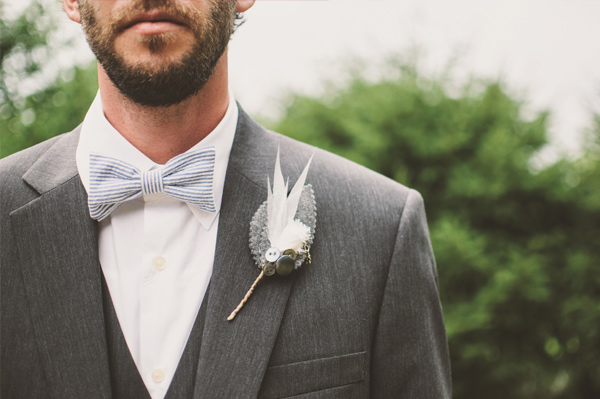 Wedding dresses and bridal jewellery are adorned with pearls because the stone means purity and innocence. To some, pearls represent future tears but, thankfully, people don’t think of pearls as a bad sign as they go hand-in-hand with weddings.

Most couples follow the tradition of not seeing each other the night before the wedding. It’s believed to be bad luck if the groom sees the dress before the wedding day, and most brides go to great lengths to keep it a secret.
The wedding ring has been worn on the third finger of the left hand since Roman times. Romans believed that the vein in that finger runs directly to the heart. The ring is a never-ending circle symbolising everlasting love.

The custom of guests giving fruit to the happy couple has thankfully been replaced by wedding gifts. Fruit was used to encourage fertility, but who wants a box of oranges instead of a toaster or kettle?

Giving guests favours – a little something to remember the day by – has been around for hundreds of years. The traditional favour is to give each guest five sugarcoated almonds to symbolise health, wealth, fertility, happiness and long life. In our century there are quirky ideas such as giving lollipops, edible flowers, popcorn, childhood biscuits such as Jammie Dodgers or mini jars of preserves.

Carrying the bride over the threshold after the ceremony was believed to protect her from evil spirits that might be lurking in the new home. Nowadays, due to health and safety regulations, the groom must remember to bend his knees and watch his back when carrying his bride!

In some cultures rain on your wedding day is a sign of good luck, so think of that if the heavens open and you get a good soaking.